For the aeronautics sector, hit by the dual health and climate crisis, the "after world" looks set to be a decarbonized one. And one that will be characterized by profound technological changes. Last September, Airbus announced its intention to develop a 100% hydrogen aircraft by 2035 as part of its ZEROe (zero emissions) programme. The European aircraft manufacturer recently tempered this optimism by stating that the majority of passenger planes are likely to continue flying on kerosene until 2050.

But green hydrogen is on the rise. In its recovery plan, France has decided to invest €7 billion to develop the sector with the aim of reducing CO2 emissions and achieving carbon neutrality.

Energy transition is Pragma Industries' credo. The Biarritz-based company, the only one in the world to offer an electric bicycle powered by a hydrogen fuel cell, is now putting its expertise at the service of the aeronautical sector, through several calls for projects.

One of these, proposed by Blue Spirit Aero, consists of studying the behaviour of fuel cells on small four-seater aircraft intended for flying clubs. “This programme," explains Olivier Savin, co-founder of this start-up based near Toulouse, "consists of understanding their performance when subjected to aeronautical constraints such as high acceleration and high rates of climb and descent. We are starting with a 200 W fuel cell, which currently equips Pragma's bicycles, we will then increase the power to test a 2 kW cell, and then 10 kW.” The first prototype flight is scheduled for the end of 2024, with the first aircraft expected to enter service at the end of 2026. It is an enormous challenge. “Kerosene for planes and gas turbines for helicopters, which are very dense in terms of energy and power, are difficult to replace in the aeronautical field," concedes Pierre Forté, co-founder of Pragma Industries and a former engineer at Dassault. “It is very hard to come up with competing technologies, simply because you have to be competitive on those two criteria! The ultimate goal is to use hydrogen for aircraft propulsion."

Pragma in talks with Safran

In the meantime, the giants of the sector, such as Airbus and Liebherr Aerospace, are testing hydrogen for “secondary” applications, in particular to replace the kerosene used to taxi aircraft on runways - synonymous with a reduction in noise pollution - or to supply the electricity needed for on-board services.

“We are also in talks with Safran Power Units, a subsidiary of Safran Helicopter Engines specialising in non-propulsive power systems, to work on helicopter ground support issues," reveals Pierre Forté. “Instead of spinning its turbine, a fuel cell would be used to power a generator to keep it electrically powered."

At the heart of the Technocité technology park in Bayonne, Akira Technologies, which specialises in the design and production of energy conversion systems and special test benches, is also putting its expertise at the service of the aeronautical sector - which accounts for 30% of its clientele. Here too, the objective is ambitious: to use hydrogen not in a fuel cell, but as a fuel.

“We are working on adapting some of our engines so that they can burn hydrogen mixed with air rather than kerosene," says Akira director Sylvain Loumé. These engines would therefore not emit hydrocarbons, CO or CO2. This would be decarbonized combustion."

The Basque SME is also a leader in the field of hybridisation. For the past six months, it has been carrying out an R&D project supported by the Civil Aeronautics Research Council (Corac), and subsidized by the Directorate General of Civil Aviation (DGAC), which consists of developing a hybrid turboprop engine based on a jet engine. As Sylvain Loumé explains, "it produces about 200 kW of power, to which a certain level of electrical power must be added that can be used to support the thermal part in certain phases of flight, but also to improve its operability, i.e. to increase safety margins in terms of the risk of extinction, pumping and overspeed.” The first test of this turboprop engine, which will serve as an R&D tool for major aircraft engine manufacturers, is scheduled for 2023.

Akira Technologies' other bold project is called Turbolab: a test bed dedicated to the study and implementation of so-called innovative aeronautical propulsion, which will cover hybridisation, alternative fuels and all-electric propulsion. “It will be a mixed tool that will be used for teaching, research and industry," Sylvain Loumé enthuses. “The teaching-research component will be managed by the Pays Basque Technopole via Estia and the technology transfer centres, and the industrial component by Akira. The Communauté Pays Basque will be responsible for the overall organization and the construction of the building housing Turbolab in Technocité.” Operation is expected to start in 2023.

I am confident that we will gradually use less kerosene and more of other energy sources," concludes Pierre Forté. “But the question is, how long will it take? A technological breakthrough in aeronautics can take a quarter of a century to reach maturity and commercial operation. But some are already flying small fuel cell aircraft, such as ZeroAvia, a young start-up based in London and California. In the shorter term, the only realistic alternative is a conversion to green fossil fuels, i.e. synthetically produced, carbon-neutral biofuels. " 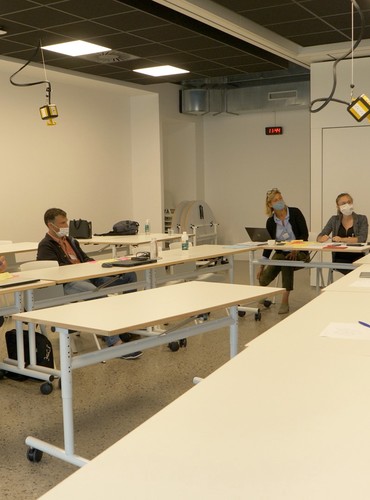